Jogging spiders and vblog no.3 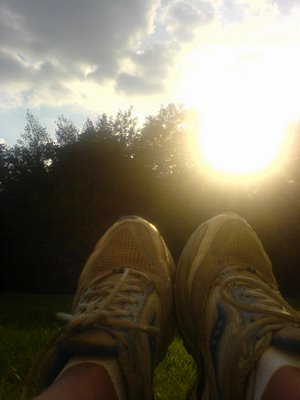 The third one's up. Took ages for me to upload it from out here amongst the old trees and fluffy rabbits.
Hope you enjoy it. I'm hearing you about more footage of house etc. In a couple of weeks we'll start to do that a bit more.
I'm still playing catch up on the vblogs as you can see about me talking about the iTunes gig.
Speaking of which...I've heard the recordings of that show and am pretty happy with them. I may even go all out and put the unedited, false starts and all up there. It was such a nice intimate evening and I'd like the whole feeling of the gig to go up. Not sure how we're going to work that as that makes it super long and some people may just want to buy the odd track...but hey.

Jogging...today. First time in far far too long. It coincides with sun filled skies and not fitting into clothes I did last summer. I ran out of the house and as soon as I did, I just found myself actually enjoying it. Why do we put these things off? In fact I got so excited about enjoying it that I was smiling and running which always raises a few eyebrows. Found a lake at the bottom of the park, some fantastic views of london and lots of little paths through the woody bits that I'd never gone down as a kid coz all I wanted to do (not an overstatement) is play the piano. I had NO interest in anything else whatsoever when I lived here as a kid....anyway....half an hour a day, that's all I'm doing. I don't know what's going to happen when it starts to rain but hopefully by then I'll be eating power bars, sporting leotards being so into it that, not going out in the pouring rain for my daily job would be deserving of a stint in the village stocks (which are still there).

Studio's you know...coming along. Not much to report there really. Just got to keep chipping (literally) away. The end of August goal is now looking to be in the other field and more likely to be mid sept before I can get my gnashers stuck in to any noise making. Has to be right though that's what I keep telling myself. This is the studio for life.

Spiders...there are so many of them here. Last night me and the largest house spider I have so far encountered were having stand off in the kitchen by the fridge. Well...it was by the fridge and I wanted to get into it... thankfully my arms are longm like the rest of me, so there was enough room to feel safe that It couldn't crawl up me as I leant across the floor with a bowlfull of leftover salad. Though... this one looked like it could have jumped no problem. It had special powers. So I was talking on the phone while this was going on and then...all of a sudden, with the blink of an eye, there were two the double equally as large. I thought I'd maybe had too much wine until they actually started to fight each other! Crikey. That made me shriek. Then one of them... squeezed itself under the skirting. It was so big that it really had to squish it's way under and seemed to go body first, legs second. I'm sure I can still see one of it's legs there now. Waiting to pounce. I know it's really silly to be afraid of english house spiders. They couldn't hurt anything but a fly. I can't even imagine it hurting me coz I know it's just a spindly leggy arachnid, which what makes it even more unreasonable. Anyway....

Next time...i'll get a little closer and a little closer until soon enough, me and my 8 legged friends will be going for jogs together in the park and joking at the dinner table.

p.s. for those of you about in London on Thursday night, Nitin'sdoing this great thing in Trafalgar Sq at 9pm. here have a look. It's free too! xx

p.p.ssst... Levi, who Is mentioned in the video is not Levi of the Weaver variety but of the Marquis. He's helping me out with getting me and my studio organized. Levi Weaver's a whole other kettle (of fish). 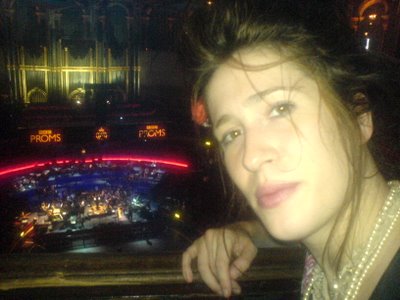 Hello y'all.
I can't believe it's already been a month since my last confession....

During this time Justine (my trusty funky film making friend) and I have been meeting up at the same spot in my studio to be, every week to record a "round up" of the week's events.

We've been doing so much we haven't had a minute to compile them and get them up onto the website but during her mad rush before leaving for Australia/Japan for a couple of weeks, we got them together for you. We have 5 so far and we're going to play catch up for a few weeks before they even out to once a week. You're going to see the studio scene behind me change gradually until it's all ready for playing about/ recording in, which looks to be mid sept now, not end July like I'd first predicted/hoped. I'm going to be posting these mostly now rather than writing my written iblog. I will of course still muse here every now and then for those who prefer the letters.

Here's the first one:

There is going to be a DVD eventually, which is why we're filming in the first place but we thought it'd be cool to do a video blog too at the same time.

The highlight for this last month has been the Nitin Sawhney Proms concert at the Royal Albert Hall, which I have just recorded talking about this but because of catch up time you'll get it in a couple of weeks once we catch up. Up there's a pic of me way up in the "gods" while they were rehearsing another song on stage. I love going to The Proms. The trick is to go to a really unpopular one (which his one certainly wasn't), take a pillow (to lay your head on/sit on), and promenade (which means queuing up on the day to get a space on the arena floor) for a fiver. I've seen some of my favourite concerts ever at the Proms. The song I was on stage with Nitin and all the other fabulous musicians of course went by in a flash. I remember consciously trying to soak in a moment and really "be there" while I was singing otherwise it'd just rush by me altogether. I watched the rest of the night, gatecrashing on Reena's (amazing singer who there also that night and sings a lot with Nitin) parent's box. We'd give one another that "Oh my, isn't she amazing" look whenever the moments took us.

The low point had to be a boy I like an awful lot crushing the news he wasn't into me in that way. Ugh.. I haven't felt that achingly helpless dejected feeling since I was like 15. Boo... Why do we fall for the one's we can't have? Why can't we have it all? I suppose there must be a reason somewhere. I'm going to hunt it down and kill it. The silver lining is of course the song that will have to come from this.

I'm still in very good spirits though as the studio is ever closer to becoming a reality. I can't bleedin' wait to get stuck in. The hallway's being painted a lovely yellow and the central ceiling above the spiral staircase will be adorning a mural of clouds and birds in a week.

Love to you all.
immi xxxxx