Just been going round and round in teeny little circles trying to crowbar out some lyrics for this b-side. Sometimes they come easy (1% time!) and others they don't...one line has come out easy though... I may just have to repeat that over and over if I don't come up with the goods soon! Which would read a little something like

Weird extra bit
"Run, run, run, and now backwards and to the left and stretch..with me oo ooo oo through rows of speeding cars, cars, da da dey ya"

I decided taking pictures and videos on my mobile phone of things that light up in my studio would be more fun instead. If anyone reading this came to the Scala gig a week ago this is one of the dragonflies that was hanging from various places around my kit and some distorted music (the beginnings of the chorus riff)
Dragonfly_lights.mp4
There's something a little irritating about this song...it's in pretty much the same key as "Goodnight and Go" which may be a little odd hearing them one after the other...I've tried playing/singing in another key but it doesn't quite cut the mustard I'm afraid. It probably won't even bother anyone but me anyway.
Today I did something highly embarrassing which I will never do again. It's called SOHO circuits and it involves me (and about 10 others) runingn around a room in a gym doing star jumps and bench presses. Not for me...definitely not for me. How is it I am the only one that looked like a total spamhead. I'm just too darned lanky for that stuff. Anyway...back to simpler things in life.

Cheese. I love cheese. Pretty much any cheese.
Can you tell I'm procrastinating!
Ugh...
Better get back to them.
Love, fluv
immi
x


Are we seated comfortably? Then i will begin... 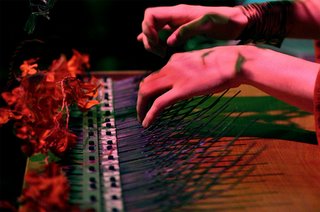 Hello everyone.
Wow. I feel like I've been on this crazy holiday for a month made loads of new friends then came home to find everything has come together. What an amazing start to the new year. The tour was so much fun. I had my own bedroom on the bus!

I would like to make clear I didn't demand that in some sudden wave of divadom... I'm not that bad...yet. However it was a lovely treat and now i've tried it...well..you know. A huge double bed that was sooo comfy with really soft sheets. It even had a shower, the room, not the bed. I miss drifting off to sleep in the whirring of the bus between cities and watching the trucks with all thier lights pass by the window through the blinds.

and the find of the year award goes to.... Zoe. A pic i found on flickr by a bloke named J. McPherson. I won't go on and on and on about how amazing, gorgeous and talented she is because you'll all start to think i fancy her or something...but...wow. Such a pleasure to be around. I'm so looking forward to spending more time with her in April when we'll be touring as many of the parts we missed on this last US tour as we can. Which means perhaps some sunshine! I'm now officially the palest shade of foundation.

Here's another pic that Mark Owens took of me in San Francisco before the gig at the fab, glow sticks adorned Great American Music Hall. We were shooting for a pic to go in his piece on me in Urb Magazine

Goodness...that was just a hello really...there is so much that has been going on! Perhaps the biggest news is that this guy

Nick Raphael, has over the past 6 months, been slowly convincing me to license my beloved album to him and his new Sony/BMG imprint White Rabbit. I am the first signing and boy does he want to get off to a good start! I met him initially a while back in my studio in London reluctantly. Some of you know my past experience with big labels hasn't been a a whole bag of laughs. He'd heard the album and had been bugging my manager for a meeting. As soon as I met the guy I found myself coming around. Much to my annoyance everything he said made complete sense. I've been hey ing and ho ing about this for a really long time and i just feel this record is too important for me to be pig headed on this matter. I have to pass on some of the responsibilty as all the non creative stuff's been taking up to much time. It's still my album. I own it. I have 100% artistic/creative control. Basically nothing changes apart from the fact that they give me the cash to do what i need to do and they take a chunk out for doing it. I believe it's totally the right thing to have done - (signed on friday!)... The thing is i could never have got a deal as good as this if i hadn't released the recorded, produced, designed and released this album already. It looks like things are finally coming around. This means...new video coming your way asap, more touring (this deal is for everywhere outside USA, canada and Mexico) in all kinds of places and most importantly more time to make more music!

As a kind of hats off to Nick and his label the artwork is going to have a little White rabbit in it somewhere. All will be revealed...this guy...Ryan Obermeyer who wrote to me about a year ago now i think....asking if i'd ever let a fan get his paws on some of my artwork...i took a look at his site and sent him an email with something along the lines of "You bet your ass i would!" So we met in NYC last November. Three months on...he sends me this!!! 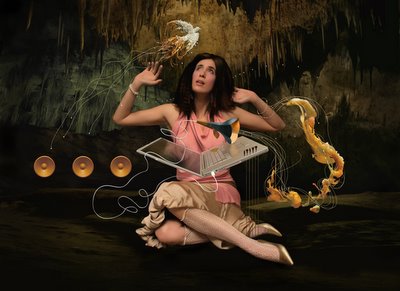 I just LOVE IT! So now he's designing the single cover artwork for Goodnight and Go around one of the millions of photos he took of me in November. Plus he's a real sweetheart. Say hi to him. it's his birthday in a couple of days.
BUT...it's Justine's birthday todat! Happy Birthday lovely. For those of who came to the Scala, Justine was responsible for the synchronized swimmers above your heads. She's also been filming me on and off for the past 8 months or so and has the camera attached to her face. Lots of DVD footage me thinks there! Mox was the guy to the side on the stage doing the projections too. I only wish i could have seen them! We've been working on stuff since july...i wrote a blog a while back about us beginning to work with each other... Thursday, July 14, 2005 to be exact. What a great night the Scala was. I loved it because there was everything from visuals, to amazing guests Duracell and Zoe plus Jon Hopkins on the virtual decks in between. A real feast! thank you to everyone who came. It was a really special night for me!! I have to admit to being a tad nervous as London always scares me a little. Because it's home and also home to "the business" too.
Richie took this photo from the balcony. 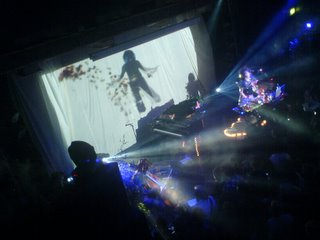 Well i'm all worn out now! Off to have a nice cuppa and maybe one or two chocolates from a box that has mysteriously opened.

Love and kisses to you all.
I'm sure there's a ton of stuff i've left out as it has been a while since my last confession. It'll all come out eventually!
;)
Fluv
immi
xx

Hi ya you guys.
Here's a little movie while i get around to writing a mega iblog!
This is Zoe (camerman and world's most talented lady...next to me of course haha...), Emily (laughing somewhere, hiding) and James (our sleeping sound man).
love, fluv
Miss heap xxxx
Tour_silliness.mov