flight no. BA 95 for Montreal 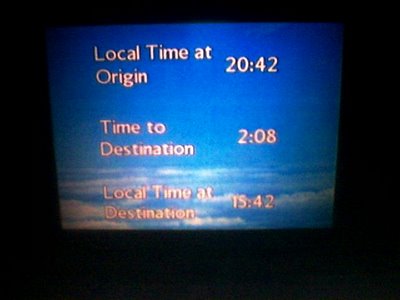 Hi there. So soon i hear you say!

I'm back on a another plane. Got a window seat and the view alone is worth the price of the ticket. Going this way across the earth is great if you like long sunsets. Which I do. 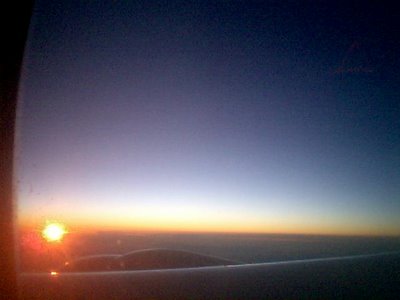 What a crazy last few days it's been. Got back from NY then spent the weekend doing various bits and bobs to prepare for going away for 7 weeks. That involved buying wallpaper on ebay (quite regency and perhaps a little over-the-top for my little flat) and taking pictures of clouds from my balcony for the mural I want painting on my living room ceiling while I'm away. I moved into the flat 5 years ago and apart from putting in a new kitchen and laying down some woodblock flooring throughout I haven't done a thing to it. Just no time really and now It's about time I did! So some lovely people are going to be beavering away at doing these bits for me while I'm away. That way when I get back (just in time for christmas) i'll have a fab new living room!

Then on Monday I was rehearsing with the Nemo, Jez (percussionist), Guy (of the frou variety) and Arve Henriksen. We only managed to get all the gear up and running from 6pm but that was all the time we needed. Nemo and I just whizzed through what we'd been doing for the past dates on tour to refresh, Jez was left to his own devices to add sparkly bits, vibes and his general percussivites (I know that's not a word but I like it), Arve turned up and just floored us all with his sheer trumpeting beauty. I just asked him to simply play whatever he felt like. My ears love that man. I always regretted directing him so much with what he did on the album. I went to see him live after our session together and wished I'd just let him go more. Guy came in around 8. it was so nice to see him again. I do kind of miss him now and then. We decided to do "Let Go" and "Breathe in". He on his harpsichord thing and also his clavichord (though it is sooooo quiet that we just couldn't get it amplified enough for him to play at the gig on Tuesday at the Roundhouse. It was invented as a practice instrument all those moons ago and not intended for electro/pop/rock/whatever concerts in huge round rooms. Jez, Arve, Guy and I just began to play Let go. Not having any idea how we were going to do it but after 6 minutes of improvising and song it just found it's natural being. Such a wonderful moment for me. Then pack down and get ready for the gig the next day.

I was running, well actually cycling about that day between studio and home and gig. I had to finish some music up for the Pool (No water) London press night that was the day after. Got it done then rushed home to get my stuff together and up to the Roundhouse to practice flying! 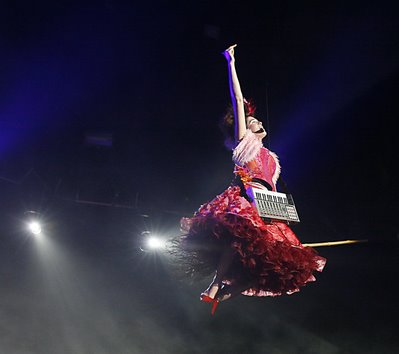 I am so happy that me entering on stage via a broomstick worked out. When I first realized that the London show fell on Halloween my first thought was I was to fly in on a broomstick. It took our crew a few days to realize I wasn't joking! Derek (our tour manager) found the perfect flying machine (a broomstick from Heals) the day before that was more than suitably witchy. I had quite a bit of fun in the day being a witch and cackling. Though when it came to the real thing I was so excited to be up there I forgot to cackle. I donned these rather attractive padded cycling shorts underneath the harness. Relieved the pain of 11 stone of witch a little from my inner thighs. I have to say I had to give myself a pat on the back after that entrance. Coming on, singing, holding a broomstick and triggering the music from my mini wireless MIDI keyboard. You got to girl some credit! It was all going so well. We got the harness off (the cycling shorts stayed on throughout). and I ran onto stage. I knew something was up straight away when the tempo on my "parrot" (aka my sampler/Electrix Repeater) didn't read what it should have done and the AX1 (the red keyboard) wasn't playing the VST (virtual instrument). Real bummer. So I made up something to try to get me out of my gear's revolt and ended the song.

Now I had to sleuth the problem. So it was time to introduce "the band". My electronic band. My worst nightmare had come true. The one where I'm not prepared. Nothing works. I have no back-up. Everyone's looking at me. Waiting. I'm sweating and running through all the gear in my head to see If I can figure it out. It's exactly what happened in soundcheck. Abelton Live (the sequencing software I use on my mac) said that it wasn't detecting an audio device. This means that Abelton will not play. No MIDI will work, no samples will trigger, I can't play any of my VSTs (piano, organ, stringsm celeste etc....) I can't even do hide and seek coz the vocoder can't read the AX1. UGH! The only thing that worked in soundcheck was to turn everything off and start up 3 times in a row. That's all i could do. So i did. And it all came alive again. I've never had that before. I'm going to spend the next 3 days in Montreal making sure I don't find myself in that situation again. Sod's law it would be the big London show with all the press and radio there. Hey ho! Thanks to everyone for being so patient though. I didn't loose my nerve too much because you were all cool about it. Willing it to work for me. So once that was out the way...I had a great time. Loved every minute of it (apart from another gremlin in Loose Ends). The magic moment for me was "Let go" with Arve, Jez and of course Guy. We did film that night so one day I can look back on it all. It'll be fun to show me flying across the stage on a broomstick, apple dunking and dancing and singing between various instruments on stage with a huge pink feather mohawk to my grandkids in 70 years when they think I'm just an old boring biddy!

All round a fantastic night. Both Nemo and Arve were both as wonderfully different to each other as they were fantastic in their performance. Saw lots of friends after the show. All my family were there. Life is sweet.

So the next day i packed and waited in for the gas man who was turning up between 9-6...why can't they just give us a time!? Of course they turned up at 5pm so i could've gone out all that time and got bits I needed. Then in the evening I went to see Pool (No water) at the Lyric Theatre in Hammersmith. I'd been waiting I guess for a year, since we started talking about it, to see it finished. I really enjoyed it. It was so much fun to hear my music on the stage with the performers acting and dancing with it. If anyone fancies a night out to the (physical) theatre then I recommend it. Some scenes are a bit much for some but I found it the whole thing pulled me here and there between disgust and laughter which I like. So that was that. Two fantastic big nights for me in a row. Now I really am feeling a high as a kite (much higher in fact looking down at the clouds).

So now I can just relax and concentrate on the tour ahead. it's the longest I've been on tour and from what I hear we have quite a fancy bus too to drive/eat/drink/sleep/shower/do internet on! How spoilt am I right now? On the plane with Jez, Walter (tour manager, sound engineer and pretty much everything in between), Matt our lighting guy and Klong. Speaking of Klong his true father, Simon Henwood, has an exhibition in New York starting 10th dec. Show him some love if you're in NY. We're going to be hooking up with the rest of the guys touring with us over the next few days whilst rehearsing etc. Very excited about it all. I explained who they all were at the end of my last blog if you want to see the full group of us.