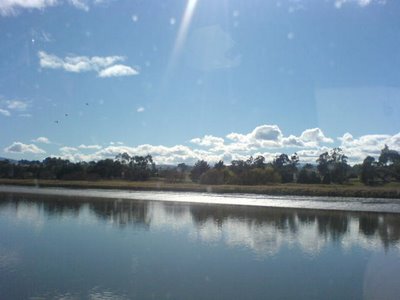 I've hit a stumbling block today. It seems to be a mixture of very short attention span and also the uncanny ability to talk myself out of any idea, direction or lyric for the song I'm working on. I can't help seeing both sides of the argument and am fighting equally for each. I'm not sure why this is...or how to get out of it. The answer doesn't seem to be in countless cups of tea or nearly a loaf's worth of toast and butter. I had to get out of the house before I started on the rest of the fridge. I'm sure i'll figure it out. Trying to decide whether to work through it tonight or to go to a birthday party I've been invited to by some guys I met the other day. It's a Doctor Who themed party. I could make some dalek noizes when I walk through the door but that's about as far as my Doctor Who-ness will go.

Maybe it won't be there first thing when i wake up. It's just a state of mind but when you're by yourself it's a tough one to get out of. Ahh the ups and downs. I was soooo set on this idea. Maybe i'll like it again tomorrow.

I'm sure If someone else was having this hiccup I would offer them lots of ideas on how to get out of it...but today, quite frankly i just can't be bothered! I'm in a mood. Maybe i need some new shoes or something? It's Easter friday and there's nothing open. Which is also not helping. And as It's Easter I should wish you a happy one so...Happy Easter. I haven' had a chocolate egg yet! That's what it is...I need a chocolate egg. I wonder if they have Cadbury's mini eggs. They are my absolute favourite. YUMMY. So small, so crispy, so full of sugary chocolate.

I'm in an internet cafe. There's a man next door to me who seems to have been eating sweets from this super crinkly packaging for the past half hour. They just keep on coming out. It's only a small bag. I wonder if he's got a tube coming from out of his sleeve from a big barrel of them concealed beneath his jacket somewhere.

Yesterday I went on a boat up the River Tamar. I wanted to find out a bit more on the history of the place and of course...go on a nice boat trip. Lots of big jellyfish in the water. They're not harmful to us. 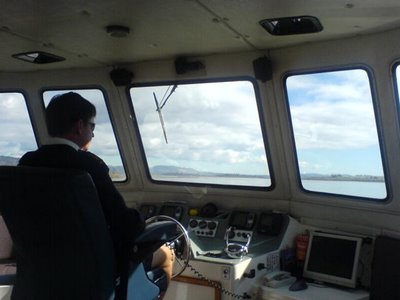 The skipper told us when he was a boy, he and his brother used to throw them at each other! My brother threw me in the River Cam when I was 13, but that's another story. I'll just say I was being a royal pain in the posterior and I deserved it. I had to then go eat in a restaurant with my family all smelly and sopping!

I sat out on the front of the boat. No-one else came out because it was pretty windy (got up to 30 knotts). I was scribbling down bits and taking in the veiw. They have black swans here. So beautiful. I like that Thom Yorke song, "black swan" from his solo album.

I kinda wanted to get up to Beauty Head just north of here as today is the start of a competition called three peaks. They have to sail to three different destinations and then run up a peak at each. They don't sleep and it takes them 3/4 days. If they get to the peak in the middle of the night then they run up with torch on head, in sometimes -20 degrees to the top and down again. Nutters! I wanted to see who would be crazy enough to do it...but then I didn't go because i got stuck into not getting anywhere with this song. Rrrr...

Right...I'm off to find some chocolate.
Hopefully next blog I'll have won the wrestling match (with myself..).


Comments:
Happy Easter to you Immi! Good luck finding that cadbury mini egg....here's a virtual one if it helps.

Ooh, I definitely know what you mean. I hate when that happens! You really like an idea, and then all of a sudden you're like "Ehh... Nevermind." but you still want to do it, but you don't... I hope you win your wrestling match soon, because I know how frustrating that is. ;) Oh, and I agree. It must be that you need some chocolate eggs. Chocolate always helps. ...Except maybe when you're on a diet.

Imogen, be encouraged. You’ve obviously gone through the songwriting process a few times, and although you believe you’re an imposter (previous blog), you’re not. Although this is my opinion and you might ask who I am, but I know what your songwriting and producing skills mean to me. I do understand your feelings, because I feel the same way even if people like something I’ve created. I also understand what it’s like to create, and for me, feeling crazy at times as I reread a line I wrote over and over until I have to consciously tell my mind that I need to move on. I won’t offer any word of advice, because I’ve also been at that place too. So, go find some chocolate, hopefully the crunchy Cadbury eggs (haven’t they gotten smaller), and see what happens tomorrow, or the next day. Happy Easter to you also. Still cold in Chicago, just to let you know if you were concerned, but I will be in the slightly snow covered Indiana for Easter. Not enough to go sledding with my nieces and nephews though, too bad. I hope your weekend goes well.

"Go outside. Shut the door."

Wow, Happy Easter! i'm brave and i'll be a little iMMi helper and make a suggestion. as far as the battle of (her) wills-actually, this is why i tune into iblog- i'd suggest (hermmm, lemme see, should i or shouldn't i) KEEP IT SIMPLE STUPID! peace n blessings-always, darryl

Don't get too frustrated with yourself, and don't forget to enjoy your fantastic trip!

No result is worth it as much when you don't encounter friction during the process. Don't you think?

hey Imogen!
Inspiration comes from the strangest places. As a singer/songwriter myself, I find doing something else helps.
All the luck in the world for this new inspiration in the making.MORAxxx

Really enjoy your song "Hide and Seek", haven't listened to your other creations, but I intend to.

What is the Mystery of Iniquity?
Nightghost