Wow...I was just outside in 40mph winds with no clothes on, lying on one of these sunbeds on my deck. The sun pouring down, listening to Avril's "Power" from his "members only" album. That was so exhilarating! I think i can count the number of times on one hand I've been outside, alone, naked...well with knickers on coz I'm still a bit shy, even if it's only lizards. Something about really crazy wind and nakedness I've decided. wow. Anyway....I know that was really baring all with you there but it was a real cheezy "I'm Alive!" moment.

Last night however I was with my new Mauian friends (pictured below this one). First however I'm going to post this picture as I look better in it, (I'm not vain, honest!) and want you to see this one first when you read the blog. haha :) 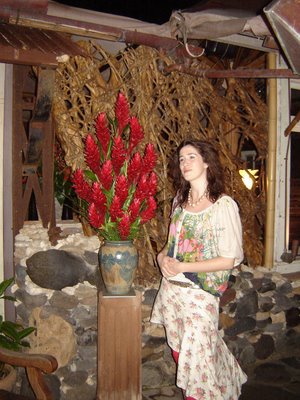 This was taken by Liam at the restaurant Cindy took us all out to last night. Thank you again Cindy! It was Yyyyummy. Would you define that outfit as Hippy? I was wearing it on the plane from London and a guy said he liked my "hippy get up". I think of Tie-dye and jesus creepers. Anyway...he was very nice. We chatted for a couple for hours.

Most of the pics I send you on this blog won't be of me...coz I'll be taking them...but...look! I think that may be a tan forming! I'm not sure I've ever had one of those before. I've been burnt, and had brownish patches but never this. It is possible! That was my first proper outing from this house. I went as far with my 2nd song as I'm going to go on this trip so felt like I'd earnt a good nosh and chat.

This one is of... from left to right...Some bird with a really shiny face and a bit of a crappy smile (everyone else's is really nice). Then Liam, his boyfriend Luis and Cindy. Our waiter took this one. So these are my new friends and tomorrow we're all going to the beach to look at colourful fishies in the sea. 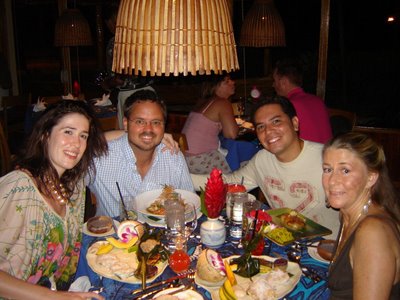 Talking of sea.
There's is quite a lot of it round here.
more than any other place in the world. Have a look at where it is in the pacific if you don't believe me.
And...it has whales in it. I saw some! Last night, Cindy was driving us to dinner, when she pulled over to a lookout point. We waitied about 20 seconds and out of the blue (literally) a HUGE whale jumps out. I'm not sure what kind of whale but big enough to be a humpback. Maybe it was. Anyone know? Near Paia. I've never seen a whale like this before. There were quite a few of them out there. Hopefully we'll see more tomorrow. Cindy told me a story of a boat full of whalewatchers round here that was out at sea and all these whales came up for a nose about. A little baby whale jumped up to see what all the action was about and landed on a woman in the boat! She had her knee broken. How random is that? I don't think i'd mind getting my knee broken like that. Pretty amazing.

Sooo..... In my last blog I said that I'd email the guy who asked me to write this song for a movie whether I was allowed to say and he said..

"Of course. I listened to it like 5 times last night.

Cooooooooool. I'm all excited about it. So this is Zach Braff. He emailed me about this new film he's directing on the day I was leaving the UK for this trip. He wanted me to write a song for the movie where the lead character will be singing it. I'm sure a lot of you guys reading this came about me through "Garden State" so I kind of have a soft spot for the guy. He scrubs up quite good too don't you think? ;) I got the script delivered to the hotel I was going to stay at the night after in LA. On the plane from LA to Maui the day after that, I read it. I jotted a few things down and the next day....I began to write (for the first time in about half a year!). A couple of days later the song was complete. not bad going I thought. If I was in London that would've taken me about a month to get round to doing.

It was perfect to have something specific to write for. The vast endless possibilities of an open canvas with no edges is terrible for the creative juices! I always thought I wanted complete freedom to write but actually, it's the limitations that force you to be your most creative. Like with "Hide and Seek". Only vocals. That was my box to work in. Anyway. I'm really happy with the song. It's called "Wait it out".

Here's a picture James (our friend and masterful webmaster) took of me once in Birmingham. I was thanking his for the Garden State soundtrack. It seems quite apt again. 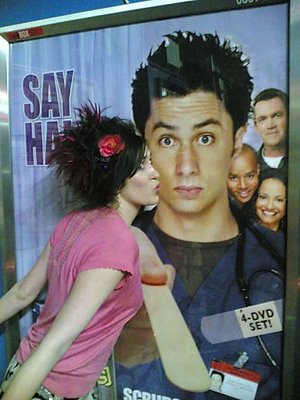 So the next day...I was so excited about writing this song that I wrote another! I've now decided this one is called "Swoon" now, not Pit-stop. it's completely chalk and cheese with the other one. Everything I do on this trip will be pretty much only bare bones instrumentation and vocals for now. I don't have that much gear with me, purposefully. The plan for writing this album is to get the songs done first. Well most of them at least. Then do the fun geeking out bit when I get back. Going for a swim in my little pool here or being blown to bits on the deck sure beats staring at a wall in my London studio (which is what happened on the last one) when I can't figure something out. The fact that this one for Zach came about gave me a real boost at the start. My dread was to arrive and not be able to write. Sometimes when your setting is too perfect, the last thing you can do is write. In this way there is something about being on an industrial estate at 3am, with the rain pelting it down against the window in my studio. You want to write something that helps you go somewhere else. For now though. This is great. it's also the perfect excuse to come out here again!


Comments:
Hehe I'm loving the daily updates. Where you're staying sounds/looks so perfect!
That's cool you've got music in aother Zach Braff film. I remember watching The Last Kiss and thinking Hide And Seek seems to sound just right at any sad point in any sad film! I like watching films and suddenly your music pops up, that happened when I was watching The Holiday as well! I should really stop watching cheesy romance films...

I am ridiculously in love with your music. It's so great that you get to create in such a beautiful environment. And a great idea, too. Beauty begets beauty.

A note on the whales: I looked around the web and it seems really likely they're humpbacks. Hawai'i is a big breeding and calving ground for them.

You look radiantly luminous by the red flowers in the vase. I don't know if the dress is Hippie but it definitely agrees with you. It has a nice organic flow.
Cheers from Austin,
Wayne - austindude